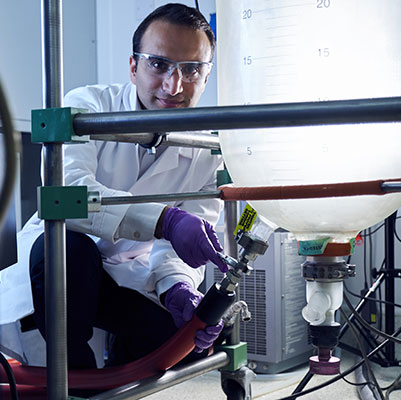 Michael is a chemical process development engineer with 6+ years of experience in various aspects of the chemical industry. He is the Chemical Engineer at Worn Again Technologies, leading, designing and delivering the company’s laboratory plant process to be used for the R&D, proof of concept and parametrisation of the data required for scale-up to the demonstration plant. He works in close partnership with the team of scientists in Nottingham as well as the company’s engineering partners in Switzerland.

Prior to moving to Nottingham, he was an Assistant Professor in Chemical Engineering at Heriot Watt University. Michael started his career in the Oil Industry working as an RDD Chemical Engineer at Baker Hughes. He later joined Hydrafact as contract Process and Flow Assurance Engineer while conducting his PhD. He also applied the principles of process engineering to the agriculture and fisheries industry as a sub-contractor.

Michael specialises in the innovative application of unit operation concepts in multi-disciplinary operations to develop and optimise new processes. His experiences include, the development of downstream additive formulations and conceptual design and modelling in the petroleum industry. Furthermore, he also has experience in the application of particle technology, filtration and biological solutions to the aquaculture industry to optimise the process unit operations. He has transferred and developed his diverse set of skills to overcome the numerous challenges in the process design at Worn Again Technologies.